You can view the page at http://uselessforums.com/content.php?35-howto-sharpening-a-lawn-mower-blade

Another many article from the depths of Mr Asa. Thank you sir!

Sharpening your lawn mower blade is required maintenance, you gotta do this shit.Having a sharp blade will cut the grass easier, helps mulch the cut grass into smaller pieces, and a dull blade does damage to the grass such as tearing it out of the ground instead of cutting it cleanly.

Should do this a couple times a season, at the very least you should do it annually. Next thing you need to do is remove the blade, so turn the mower over and find the proper socket size.
See the little lines around the perimeter of the head of the bolt? Those lines denote that it's a standard bolt, that means you'll need a standard wrench or socket. In this case you need a 5/8. As you can see, this blade has been beaten pretty bad, I've been neglecting it for a little while, but I hate this mower, so shit happens. Ok, now you gotta get to work. Get to your work bench, put it in a vice. Don't have either of these? Send in your man card.
The dirtier your bench, the better. Now, most people fuck up when they sharpen blades by reaching for a grinder. You don't use a fucking grinder on a blade, on any blade. You don't need to, it's complete overkill, and you can easily EASILY screw up the blade. Use a file, you have more control, and it does not take long.

Cleaning the blade to this point took maybe 10 minutes. The only real issues I have left on this side are the two nicks where my fingers are, and a very worn spot right in the middle. Another 5-10 minutes and these were gone.
You want to match the original edge as much as possible, it should be an angle of roughly pi/4 Now, the point where you're done is A) when the blade is cleaned up completely, or B) when you pull a domon and hurt yourself. Happily for me, these came both at the same time. Personally, I don't wear Bitch Mittens, but safety gear such as gloves can help prevent issues such as this. The way you know you're done is the blade is sharpened smoothly and completely, no more nicks, no more dull spots. The way you know that you need to take a break and sit down and watch some Spongebob is that you start getting sloppy with the file. The way that can tell that you're getting sloppy is that you don't have the same wear pattern on the material you're working.
It's a little hard to describe what I mean by this, so here's a couple pictures.

A normal sloppy wear pattern doesn't photograph very well, so I took a piece of aluminum and filed it down to an edge, then colored it. To show a bad wear pattern I filed it at a different angle. The sloppiness is revealed as two different patterns. Second note:
When working with a file, you want to start with a rough file. Rough files have relatively less teeth per inch but bigger teeth, so they cut more and cut faster, unfortunately as a result of this they leave a rougher, uglier edge.
Fine files have more teeth per inch that are smaller than rough files. They don't cut as much, but they create a much smoother, "prettier" edge.
You don't really need to use a fine file when you're doing work on something like this, fine edges are for delicate work such as chisels, rough edges are for tools that rely on a power stroke for them to do work such as axes, machetes, or lawn mower blades.

That being said, you can use a fine edge file on this to put a good edge on a lawn mower blade, but it won't last more than one trip around the yard, especially if you're hitting any sort of acorns or anything similar. Got an idea for an article of your own that we should hear about? Want free swag? Make a thread in the Article Submission forum or email it to [email protected]. If accepted, you'll receive a free tshirt!
Last edited: Dec 7, 2012

BTW, thanks for this. I honestly never thought of using a file. Not only do I not have a bench grinder, using a file seems easier.

fly said:
BTW, thanks for this. I honestly never thought of using a file. Not only do I not have a bench grinder, using a file seems easier.
Click to expand...

I use the same method to sharpen my mower blade.
I use a mulching blade, with a bagging mower, and all the clippings go into the compost bin
Having a sharp blade chops the grass into finer bits, which is better for composting.
Also, when sharpening, be sure to file the blade in the right direction, like so: 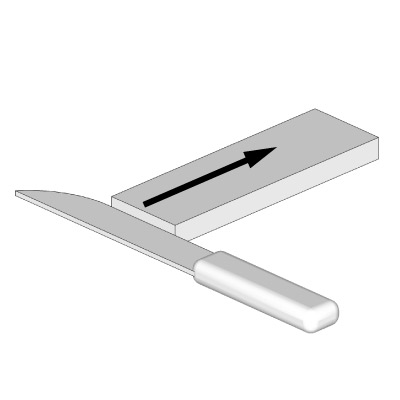 otherwise you just make it worse than it was

After buying a new one every year at Home Depot, I'll be doing this soon.
C

fly said:
After buying a new one every year at Home Depot, I'll be doing this soon.
Click to expand...

:rofl: You bought a new blade every year?

i buy a new lawn mower every year

CletusJones said:
:rofl: You bought a new blade every year?
Click to expand...

Rather than sharpen it, ya.

Even a new blade off the shelf needs to be sharpened before use.

Pancake Masturbator said:
Even a new blade off the shelf needs to be sharpened before use.
Click to expand...

Well it was better than the dull one from the year before.

fly said:
Well it was better than the dull one from the year before.
Click to expand...

Even this guy appreciated a sharp mower blade

fly said:
Rather than sharpen it, ya.
Click to expand...

You know there are lawn mower repair places that will do this for $5, right?

tre said:
i buy a new lawn mower every year

Whenever my lawn gets too long I have the turf replaced.

shit, i never knew the lines on a bolt identify it as SAE. I always just read those as the class of bolt, not realizing that they also meant SAE vs Metric

thatll be handy, keep me from just trying shit that looks right in my wrenches/sockets