When you blow a load in zero-g , its everyones problem

except the chicks would be slo-mo diving in front of them, not away from

I would do dirty things for/with/to Mariah Carrey

Onnotangu said:
I would do dirty things for/with/to Mariah Carrey
Click to expand...

Onnotangu said:
I would do dirty things for/with/to Mariah Carrey
Click to expand...

What about Drew Carey?
Does he have a shot?
O

JPatrick said:
What about Drew Carey?
Does he have a shot?
Click to expand...

Im sure it could be arranged
O

JPatrick said:
Im sure it could be arranged
Click to expand...

it's not gay as long as the balls don't touch.
S

JPatrick said:
When you blow a load in zero-g , its everyones problem
Click to expand...


Imagine floating around a corner and running into one.


Imagine floating around a corner and running into one.

JPatrick said:
When you blow a load in zero-g , its everyones problem
Click to expand...

gives a whole new dimension to spitting vs. swallowing
K

Man, don't you guys ever think about anything other then p0rn?

kiwi said:
Man, don't you guys ever think about anything other then p0rn?
Click to expand...

kiwi said:
Man, don't you guys ever think about anything other then p0rn?
Click to expand... 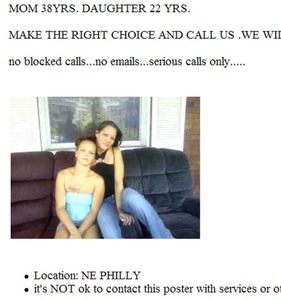 MEN STREAMED into the Tacony home at all hours of the day, often emerging after 30 minutes, neighbors said.

But what the neighbors didn't know was that Young and Smith allegedly were offering a sexual two-for-one deal on the Web site Craigslist.

Young and Smith, plus Young's boyfriend, David Riley, 29, who also lived in the house, were arrested by police yesterday after an undercover cop, posing as a john, entered their basement lair. Cops were tipped off by complaints about the nuisance house and began surveillance on the trio about three weeks ago. Investigators found the Craigslist ad around Sept. 30.

Young and Smith negotiated a $200 rate for both of them at the same time and "for multiple sex acts," said Lt. Charles Green, with the Citywide Vice Enforcement Unit.

Once the undercover cop gave the twosome the cash, Young and Riley left the first-floor apartment to buy condoms and cigarettes at a nearby store. Shortly after they returned, police entered and arrested the women.

Riley hid in a crawl space inside the bathroom, where one of the women had placed their four pitbulls. Police soon found him and recovered a small amount of marijuana from him, Green said.

Smith's children - two daughters, 7 and 5, and a son, 3, were not in the house at the time of the arrest. They were with a babysitter in Kensington, but as of late yesterday afternoon, the children were in the custody of the Department of Human Services, said spokeswoman Alicia Taylor.

She said that the agency was determining whether there were relatives to turn the children over to.

All three adults were expected to be charged last night with prostitution and conspiracy, Green said. Riley will also be charged with a narcotics violation.

When Green entered the house - which had cable TV and a queen-size mattress covered in a comforter made by the tween brand Bratz and girlish pillowcases featuring princesses and monkeys - he was "taken aback."

"I thought it was deplorable," he said. "It was sick."

Young had a different take, telling TV reporters as she did the perp walk into the police van: "It's a messed up world out there. We have to do this just to get by."

When pressed by reporters as to what they had to do, Young responded, "Not much. Just massages and stuff."

Many neighbors applauded when the two women were escorted outside by police and in handcuffs.

Still, "it was heartbreaking to see them kids," said neighbor Janet Ray. "The parents didn't take care of them."

Ray's son James Swope said he once saw the boy outside in the rain, wearing only a diaper.

"All the neighbors would keep an eye on them to make sure they didn't run out into the street," Swope, 23, said of the kids.

Sometimes, it was too much for neighbors. "They would walk around with 'G-strings' and they were in the backyard with no tops," neighbor Jane Greer told CBS 3.

Young and Smith were known around the block to be working as strippers at Dangerous Curves, on Tacony Street near Comly.

The club closed over the summer, and that's when neighbors such as Ray noticed increased activity at the house.

"I can't see how the kids were with them this long," she said.

The city Department of Licenses and Inspections yesterday deemed the house a nuisance because of prostiution and forbade its residents to return.
Click to expand...