You can view the page at http://uselessforums.com/content.php?69-Pizza-Frit

When I was a kid, my mom would make this for all the holidays and all of us kids loved it. We also knew that when we went to the cousin's houses for holidays it would be there too. Super easy to make, & as a kid, we all looked forward to 'Pizza Frit.'

Since it's Easter weekend, I made some today & started taking pics late!

The instructions from my Italian Grandmother:

Thaw bread according to directions on package. Let thaw at room temperature or in refrigerator. Cut off a piece of the dough and pull a hole in the middle. Fry in 1 quart of oil until browned on one side, turning to brown the other. Drain on paper towels. Dust with powdered sugar.


I started taking pics late. We use frozen Rhodes white bread dough. My daughter & thaw only one of the three loaves. The night before, at about 10pm, Put a frozen loaf in a pan like this, sprayed w/butter flavored pam, and cover with plastic wrap that has also been sprayed! In the morning, if it's not fully risen I put it in the microwave & turn the oven light (under the microwave) on. No, you don't nuke it. In about another hr, it's nicely risen just from the added heat from the bulb under your microwave. 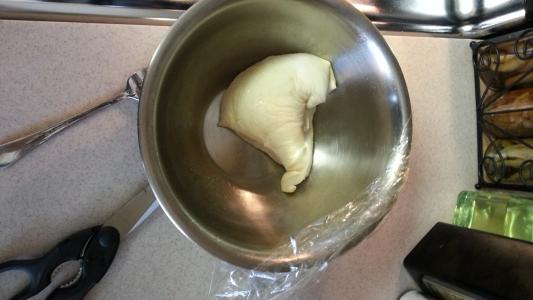 Heat 1 qt of canola oil on the stove. There's a little less here (I used a 1qt sauce pan just big enough for one. My grandma used a frying pan and did several pizza frits at the same time.) Temp should be around 330 i think. I broke the thermometer a year ago. Now, we put it on a medium low flame & let the oil get hot but no where near smoking.

I use kitchen shears & cut off a chunk (that's a technical culinary term) and pull a hole in the middle of it. Since we were down to the very end of the dough, it's not much of a donut shape but tastes just as good. 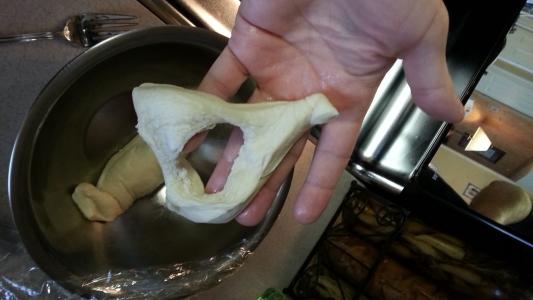 Carefully put it in the oil. The oil should bubble a lot right away but settle down pretty quickly. 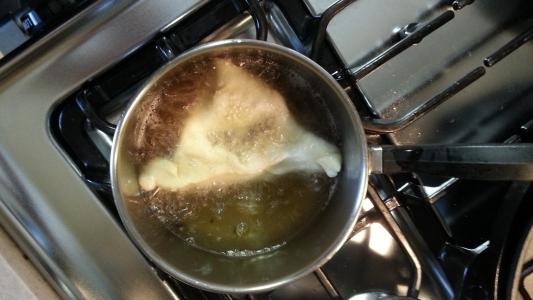 After 1.5 - 2 mins you should see it start to brown in the middle and around the edges. (see, less bubbles) 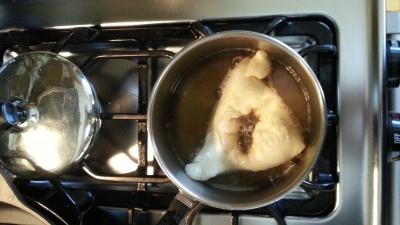 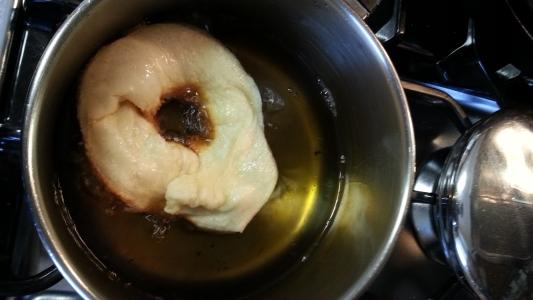 flip it over with a fork or tongs. 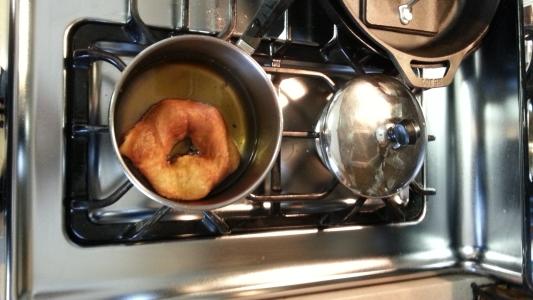 It's easy to check it to see if it's done enough. Take it out about a minute after the turn and put it on a paper towel to drain. 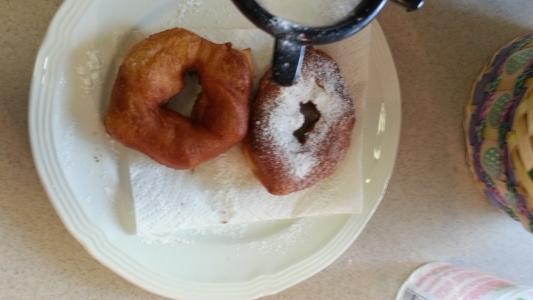 Starting to add the powdered sugar. You HAVE to have a sifter. Using a spoon, while workable, is a mess. . . And, if you want the 'coolest Dad/mom/aunt/uncle of the year' award, you let the kids do this part. 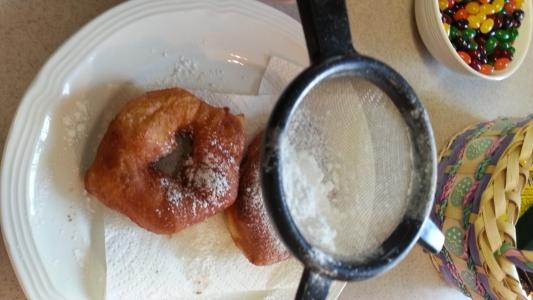 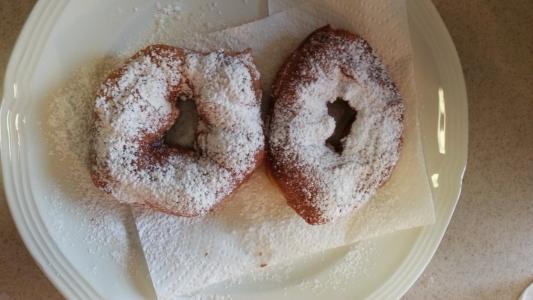 One frozen loaf makes about 9. (they're about the size of a regular donut.) My daughter & I polish off an entire loaf in a morning. You just keep grabbing another one. Yeah, it's not the day you're starting your diet.

Also, they're still pretty damn good if they're slightly overdone. Just turn the heat down for the rest, but don't get rid of that first one if the oil was too hot!

If you're bringing them somewhere, bring extra powdered sugar to put on them when you serve them wherever you go so they look like a million bucks.

Dad would do something similar, but he put the sugar and donutty thing in a brown paper bag and let us shake it. Also great fun when you are a young'un

im confused as to which part of this is pizza

Domon said:
im confused as to which part of this is pizza
Click to expand...

I thought pizza was originally a flat dough?

all the 'toppings' & seasonings are ways to change it up.

I really want one of these right now.

Just had a classic newfoundland style turkey dinner. I'm gonna make a thread on turkey flips sometime in the next few days. Turkey/gravy/potatoes/dressing/etc baked in a pastry, sooo fucking good.

The Scots do a proper pizza frit. Take a 12" pizza ( complete with whatever toppings you like) dunk it in batter then deep fry. Then have a coronary and die.

Just had a classic newfoundland style turkey dinner. I'm gonna make a thread on turkey flips sometime in the next few days. Turkey/gravy/potatoes/dressing/etc baked in a pastry, sooo fucking good.
Click to expand...

DJBrenton said:
The Scots do a proper pizza frit. Take a 12" pizza ( complete with whatever toppings you like) dunk it in batter then deep fry. Then have a coronary and die.
Click to expand...

The Scots need to come to the Florida State Fair.
S

There is such a thing as 'Easter' food?

We don't really celebrate it.

sizzlinggrace said:
There is such a thing as 'Easter' food?

sizzlinggrace said:
There is such a thing as 'Easter' food?

You're not Catholic? I thought you were Spanish.

We also do an 'egg pie.' It's like a fritatta. sooooo good. recipie/pics another time.
S

fly said:
You're not Catholic? I thought you were Spanish.

I was raised Catholic yes. But we're not the practicing sort. Easter was never big in my house.
C

Are these the same as malasadas?
C

Because I love malasadas. And they look the same.
Z

My Grandma used to do something similar, but she'd use canned biscuits and just tear a hole in the middle of them... we called them donuts.
You must log in or register to reply here.
Share:
Share
Top Bottom