wtf does that mean?

Sunshine Sanchez said:
wtf does that mean?
Click to expand...


Who are you talking to keeks?

Harold of the Rocks said:
Who are you talking to keeks?
Click to expand...


It's encoded so only whites may read it.

Beck has since removed this image from his wedsite. 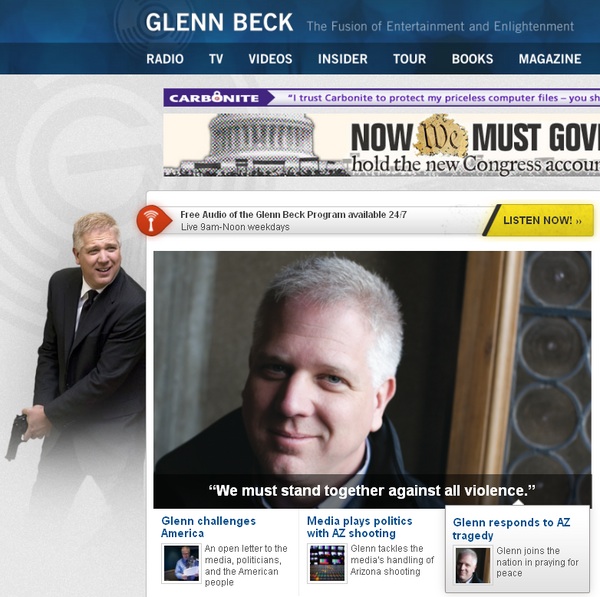 Get your finger off the trigger douchebag!

Too bad he took it down. I think everyone over reacting about this is giving in to the psuedo 'pc' crowd.

Amstel said:
Too bad he took it down. I think everyone over reacting about this is giving in to the psuedo 'pc' crowd.
Click to expand...

you are pure comedy gold..

this just in from CBS: newsflash. woman shot in AZ. no one talk about gunz ne more.

Amstel said:
this just in from CBS: newsflash. woman shot in AZ. no one talk about gunz ne more.
Click to expand...


Nice made up reality once again..

On Saturday afternoon, with his friend Gabby Giffords in surgery fighting for her life, Pima County Sheriff Clarence Dupnik railed against the tense partisan politics - "the anger, the hatred, the bigotry" - that prompted the mass murders outside Tucson, in his view.

And, jarring as such claims may be, we understood. Or tried to understand, despite the spectacle of a lawman - an official whose very job it is to dispassionately gather facts and to maintain order and calm - tying the attack on Rep. Giffords and others to political speech in Arizona, which he considers prejudiced and bigoted. There is no evidence that the state's politics in any way contributed to this atrocity.

Was Dupnik unnecessarily inflammatory? It seemed so. But it came mere hours following a horrific, bloody mass murder. If you weren't on edge, you weren't being human. But then, on Sunday, the venting continued anew. And a horrified nation began paying closer attention to the Pima County sheriff.

The world's eyes, once again, focused on Arizona for the worst of reasons. And Dupnik stood before the cameras interpreting the shootings as politically motivated, despite an increasing weight of evidence depicting the shooting suspect, Jared Loughner, as a mentally ill young man who rambled incoherently about pervasive bad grammar and other apolitical obsessions. Even Dupnik has observed that Loughner had made death threats against others and that they had been investigated by police.

Still, Dupnik used the opportunities to blame Arizona's lax, new gun laws and, again, the angry "rhetoric" of talk radio. The shootings were spurred, he suggested, by "the rhetoric about hatred, about mistrust of government, about paranoia of how government operates."

Dupnik took up his cause again on Monday. And, in response, we have to say at last . . . enough. Enough attacks, sheriff. Enough vitriol. It is well past time for the sheriff of Pima County to get a grip on his emotions and remember his duty.

With each passing hour, we learn more about the 22-year-old suspect. And everything we learn adds to the profile of a deeply troubled young man detached from reality. There is nothing to date that suggests any partisan motivation for his crimes, whether right-wing or left.

Dupnik needs to recall that he is elected to be a lawman. With each additional comment, the Democratic sheriff of Pima County is revealing his agenda as partisan, and, as such, every bit as recklessly antagonistic as the talk-show hosts and politicians he chooses to decry.

he's the same guy that mentioned putting uzis in every crib. I like him.


Circular logic.. Why am I not surprised...


THIS WILL STOP THEM.

I had respect for him until right now.
P

He's a scared pussy. Really, how would that law have prevented this?

they're probably all shitting themselves on both sides of the aisle that this will spawn copycats
You must log in or register to reply here.
Share:
Share
Top Bottom