The only thing that comes to mind like that was the square grooves issue with Ping irons. That was eons ago.

fly said:
Wasn't there a specific driver head that people had been using for years that they later found broke the rules?
Click to expand...

I'm not sure. There was a divide a decade ago between rules on the USGA and the R&A (European governing body) over the maximum allowable coefficient of restitution (COR) in the drivers. The USGA maximum was .830, while the R&A allowed up to .860. Driver manufacturer's started putting pressure on the USGA to change the rules so that they could sell the same clubs across the entire world, instead of having to split models up for different markets. So there was a probationary period of like five years in 2003 that upped the maximum COR to .860.

The most well known driver during this transition was the Callaway ERC lineup, which had a COR that was too hot. That's probably the club you're talking about.

When 2008 season ended, everyone started using .830 COR limts again in both the USGA and R&A. A lot of people who loved their hotter drivers went nuts, both amateurs and pros. Now, in terms of hotness of driver heads, any driver head from any OEM since 2008 are identical at right on .830 COR. The only difference is marketing gimmicks, or possibly slight changes in MOI (resistance to lateral torque) due to head weighting.

The whole thing is bullshit, because testing showed swing speeds of 110mph or more would be required to actually benefit from the higher COR. So generally only the pros and select amateurs would benefit. Of course Callaway's marketing team disagreed.

Played here yesterday. There are 12 tour pros that are members. Saw Lucas Glover out practicing. This course completely kicked my ass. I am out of practice big time after a year off due to sickness. http://www.fredericaliving.com/frederica-golf-club

Going to try and play tomorrow with the bruised/cracked ribs.

Lots of painkillers and scotch will be present.
C

The Memorial Tournament is occurring. So naturally, it's raining this entire weekend. 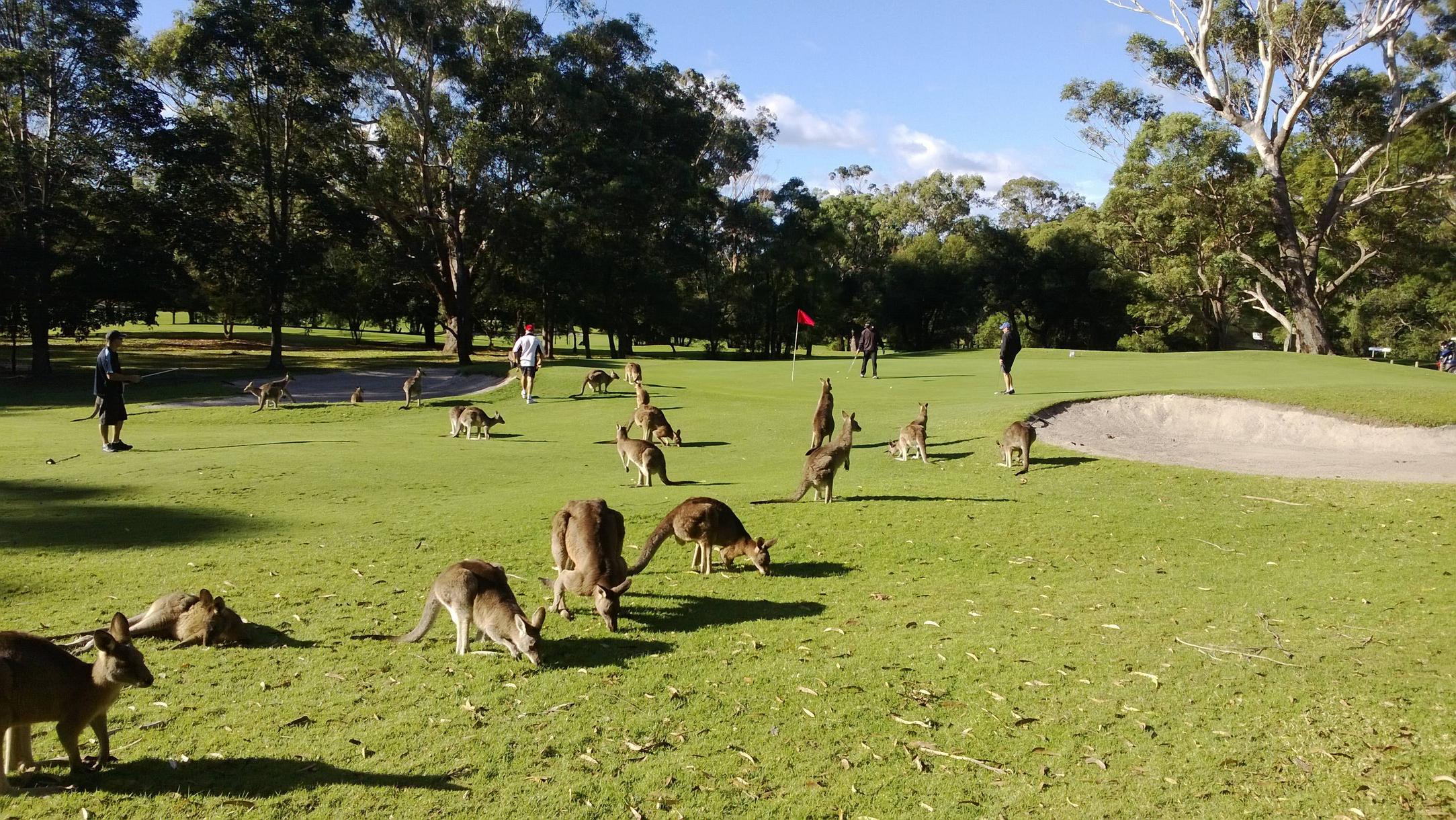 I had an equipment fitting that ended up as a reshaft of my set of irons. What an eye-opener. I was able to sit on the vector launch monitor and try shaft after shaft to compare. Way better than just guessing.
C

NEVERMIND FLY. I GOT IT.
C

TL;DR I played golf sick and kinda shitty this weekend. Had a decent time, learned some stuff about myself. This is mostly for my own therapy:

I started out this year like every year with a goal of trying to improve. I decided that my A-game performance is excellent, but that I just don't have the consistency. Athletes talk about being in the zone all the time and I've definitely felt it, only to come out of it again realizing with great disappointment that I don't have control over being there. My grandfather once told me that the best round of golf you play will be your easiest. I decided a few months ago that I would go back to semi-serious tournament golf to try and work on my mental approach to the game.

I haven't played a real tournament since high school. That's 12 years for those counting. My golfing ability is actually about the same now as it was then. The only real difference is that I'm probably 30-40 yards longer now. I was a wispy little shit then and now I have this beer gut to lever against. Also, my bald spots might cut down on wind resistance too. I dunno, I'm not a scientist.

This past weekend was the amateur tournament at Turtle Bay. The tournament is flighted by handicap and I noticed a very minimal about of sandbagging, which was surprising. I played at quite a disadvantage so it's hard to tell where I actually stand. I caught the flu on Thursday and managed to sweat out my fever by Friday afternoon but I was not in good shape. My muscles ached, my back was stiff, and I was coughing. On top of this, the sun and humidity were brutal. The air was stagnant and the temperature hovered around 90 degrees.

The two courses played at this event were long. One was fairly easy, the other unforgiving as there are thick ironwood forests lining the left and right sides. And where there are no trees, there is water.
Fazio: 6,769 yards 73.8/130.
Palmer: 6,795 yards 72.5/140.

My strategy going into the event was to hit driver only when I absolutely need to. I spray it and on Palmer, it's unacceptable. Most of the tee duty would be with the 3 wood and 2 hybrid. I thought I might get some ribbing from players in my groups about my infrequent use of the driver but nobody said anything. And I out drove most of them anyway. This was tournament golf. They understood why I wasn't using it.

In my first round (Fazio) I played with a guy named Vic. He was an affable guy in his late 50's. He had the worst nerves of anyone I had ever seen. He shook violently through the first five holes. Enough so that I wondered if he had Parkinsons. He shook again on the 18th hole and was so flustered after the round that he couldn't even confirm the score I kept for him. He just said he trusted me. It was some high math. I had never seen a ten handicap shoot 108 before. I felt bad for the guy. He had the worst composure I had ever seen, which was reassuring to me in a strange way -- at least I'm not THAT guy. His bad play was hard to ignore and sometimes I wonder if it bled in to my game. I spent a lot of energy trying to count his strokes instead of focusing on my own shots. We actually had a discussion as to whether he made a 9 or an 11 on a par 4. I wrongly negotiated a score of 10 to get past the hole. It didn't matter, of course.

Back on the first tee, before I noticed his shaking I had small butterflies that brought me right back to high school. It was actually a comforting feeling and I played the first hole, a 511 yard Par 5 basically on autopilot. I didn't hit a bad shot, I just sorta bunted my way toward the green and two-putt for my par. That was sort of how my game went on Saturday. I can't recall any stellar shots, and a few horrid ones. Carded an 83, which put me in a 6 way tie for like 30th. One thing I did notice is that my grip pressure was tense. No wonder I was pushing and pulling shots.

In the second round on Palmer the groups were matched up by score so we had all shot 83 the day before. I was more comfortable with this grouping. I was hot to start. In the first nine holes, I had seven pars and two bogeys, which I'm fairly sure was leading my flight in this round. On the 10th hole, I was overly confident and made a tactical error. I took out the driver. The hole is a slight dogleg right with OB on the right side. There is a tree 150 yards from the tee box that blocks the line toward the fairway. Options are to hit a 180 yard shot to the left of the tree and have 220+yards to the hole, or hit a draw with the driver to the right of the tree over the OB and bring it back left for a small wedge shot. That's the pro shot. That's the shot I chose and it probably cost me the round mentally. I erred and hit a line drive that never got more than 10 yards off the ground. The line was good, but it was too low and not left enough. The course was definitely in my head after that. I limped in with an 8. I'd also score a 9 on another tight par 4 before the round finished. I birdied the last hole to finish the round with an 87. I was 13 over on the last nine holes. It was an amazing meltdown.

I'm not sure where I finished in the tournament. Probably somewhere right in the middle of the pack for my flight. I saw a lot of scores in the high 80s and low 90s. On the bright side, the tournament was sponsored by Oakley and the swag was excellent. A shirt, shorts, hat, belt, and golf shoes. Like $250 worth of stuff.

Takeaways:
Playing well makes me more aggressive. I need to work on throttling that back. Stick to the gameplan. That driver was a rookie move on my part and it cost me a good score. This is where I think having a caddie would help me. Someone to tell me "hey dipshit, put that club away."

Tournament rounds are slow. Painfully slow. The average time on the course for each round was about 5 hours and 30 minutes. I have to figure out a way keep my focus through that.

I had some work on Maui in the Kapalua area. Afterward I went to the Plantation Course, the site of the Hyundai Tournament of Champions for a quick 18 holes before my evening flight home. And by quick, I mean 5 hours. The pace of play here is slow, probably due to it being overrun with weekend warriors dragging the missus around.

A few pictures, most of which were posted to fb. 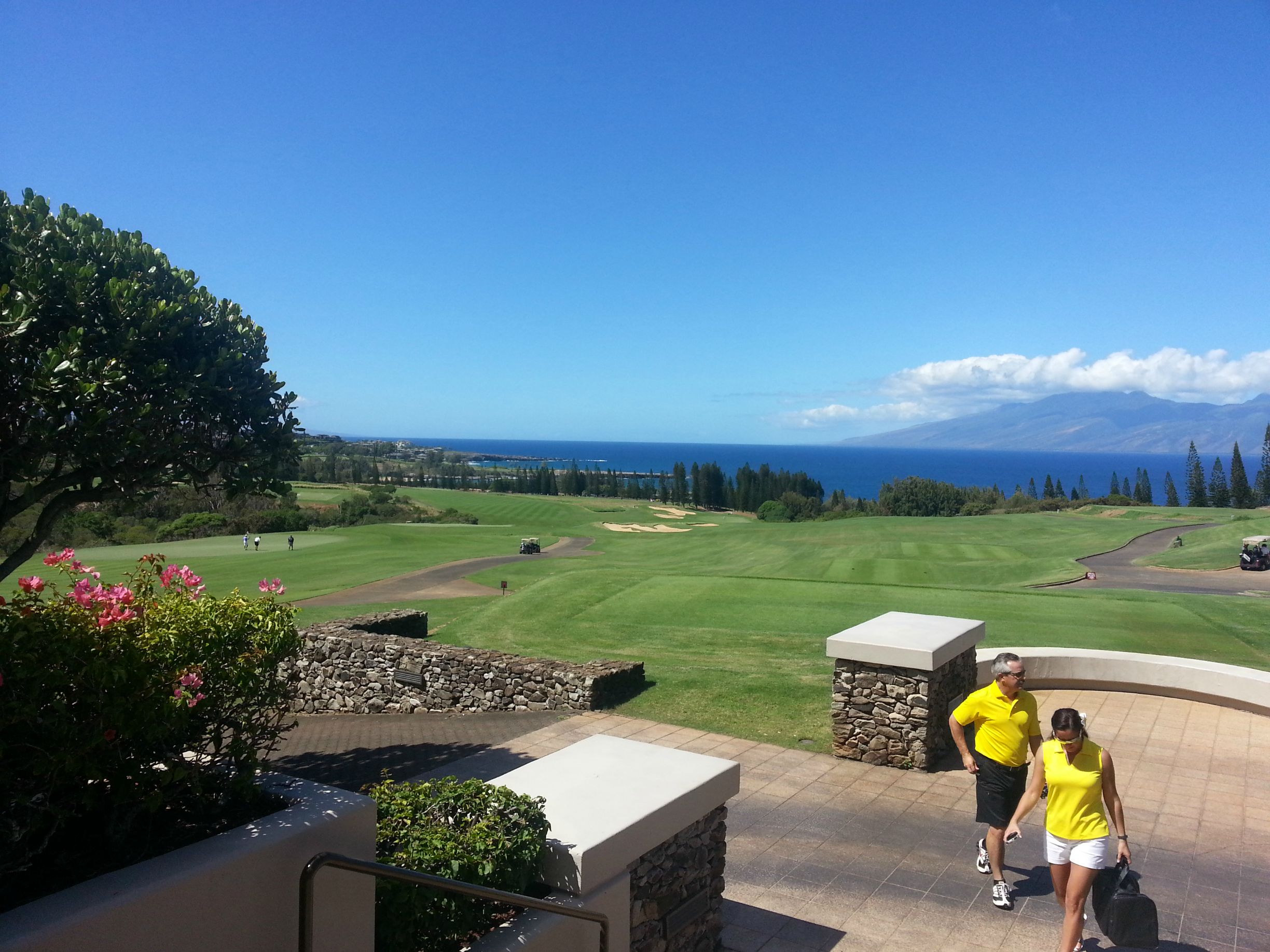 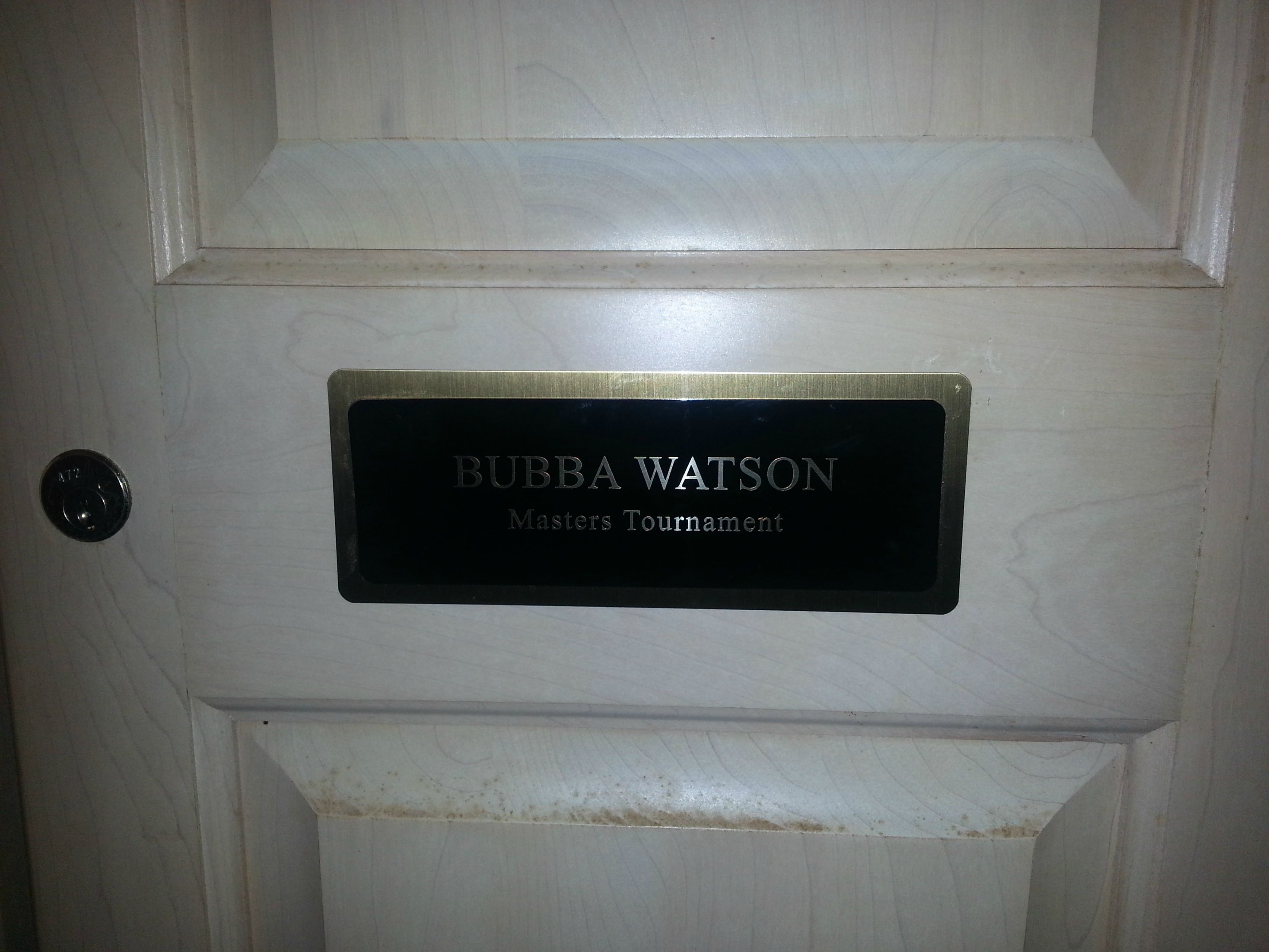 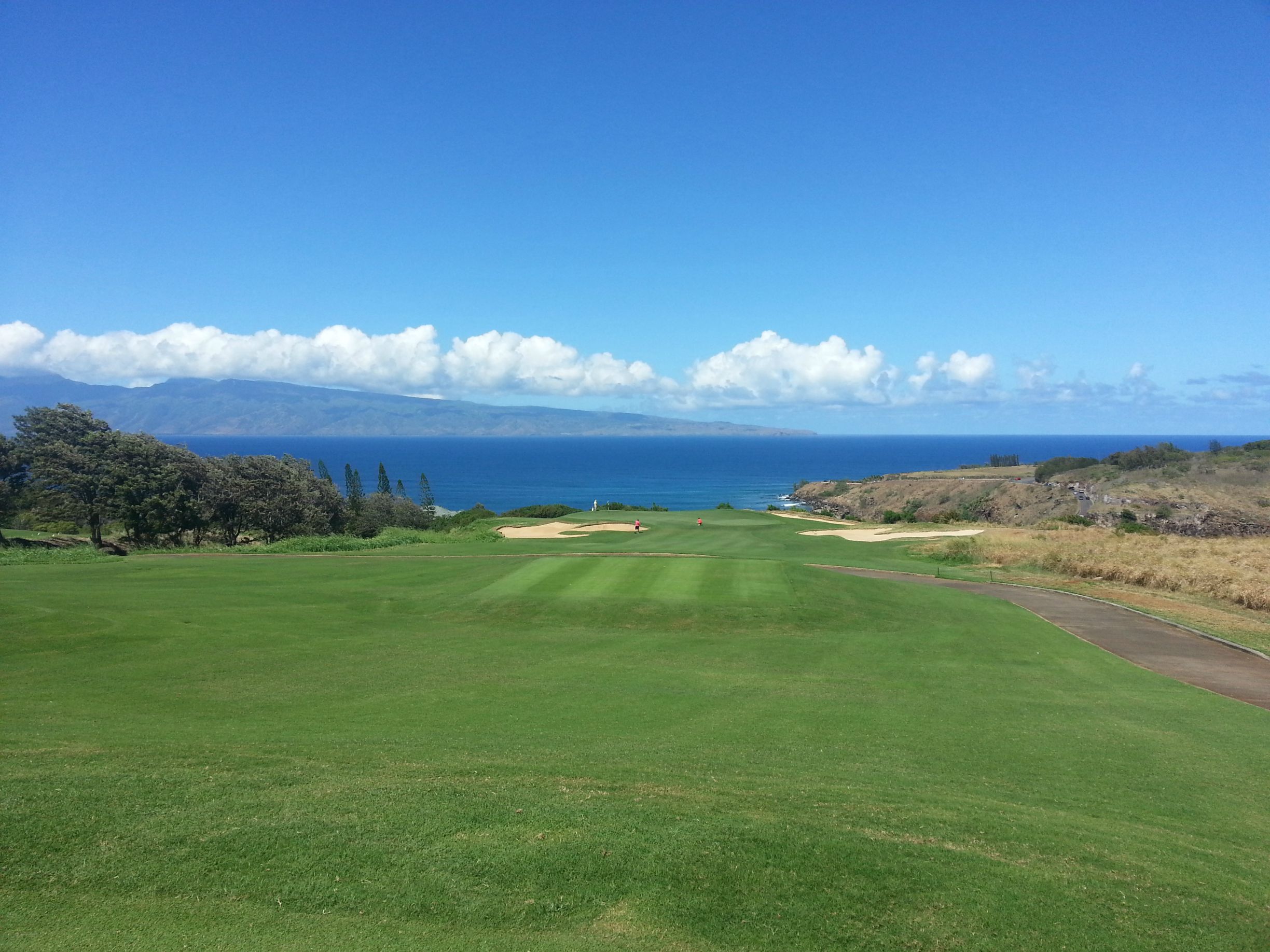 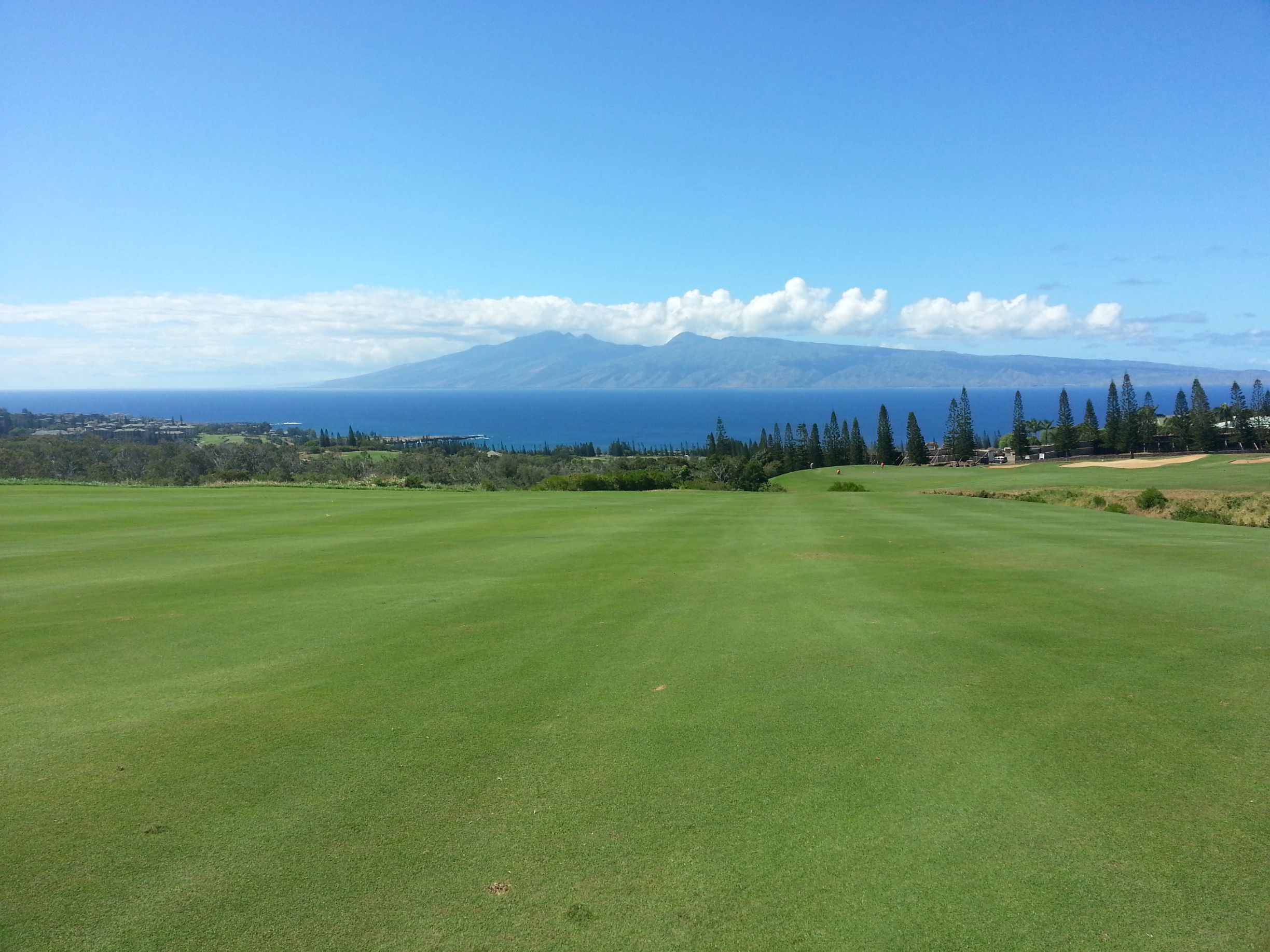 Yesterday was one of those days that gives the Hawaii Visitors Bureau a boner. Sunny clear skies, gentle breeze. And by gentle breeze I mean strong enough to need 2-3 clubs more into the wind, but not so strong as to blow a resting ball off the green. The fairways are surprisingly wide but there are many long forced carries, especially on approach shots. Half the tee shots are blind, so I think my drive placement would be much better the next go around. By the end of the round I was exhausted from the heat.

I was striking the ball really well yesterday. I hit 14 greens and had 35 putts. The three putts killed me. I was reading all kinds of break that wasn't there. Birdies on 2, 8, and 18 got me in at 77, or +4. I was impressed with both the course and how well I managed it considering it was my first time. I would play here again.

I know the type. 77 is pretty fucking solid. Congrats.
C

That's one hell of a water hazard in the back.
C

Yeah, it's visually stunning. The shore is actually about half a mile away. It looks like we're right on it though. Honestly I didn't mind that the round was slow since the scenery was great.
C

70 -- one shot under par. My first under par round. It was during the member-member tournament at my club and I think I'm addicting to seeing my score in red pen on the leaderboard.

It wasn't how I thought it would be at all. In my head, an under par round looks like 17 pars and one lone birdie. I was all over the place. I had a double bogey. I had two three-putts. I duffed a green-side chip. I missed several putts under 10 feet. I also had five birdies and an eagle. All things considered, it's kind of funny that my round was only one under. It's totally true though. Your best round will be your easiest.
You must log in or register to reply here.
Share:
Share
Top Bottom