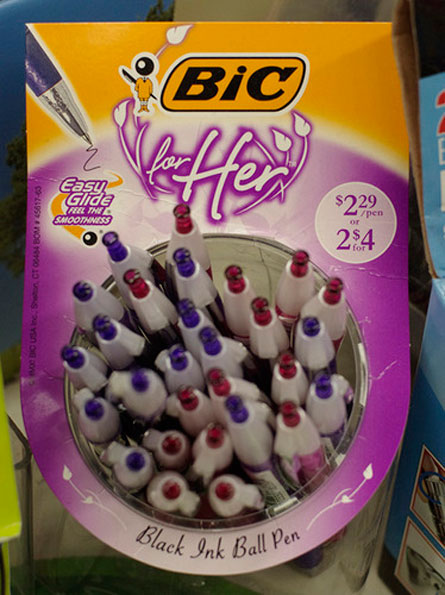 BIC came out with a special pen that can only be used by those with vaginas, because it comes in girl colors, is specially designed to be held by tiny lady hands and it also doubles as a knife that woman folk can use to cut their man husband's sandwich in the kitchen. This pen is important, because women finally have an ink pen to write with instead of writing with a tube of lipstick all the time. The funny hos on Amazon.co.uk know how important this is and have been writing priceless review after priceless review:
Click to expand...

From daveyclayton: I bought this pen (in error, evidently) to write my reports of each day's tree felling activities in my job as a lumberjack. It is no good. It slips from between my calloused, gnarly fingers like a gossamer thread gently descending to earth between two giant redwood trunks.

From Drake Tungsten: I allowed my wife to write the grocery list with one of my pens. Shortly thereafter she went out and bought a bunch of flannel shirts, cut the sleeves off and grew a mullet. While she was writing her feminist manifesto, I secretly switched out the man pen with a BiC For Her. She's now back to baking apple pies, vacuuming in heels, and popping bennies in order to keep her girlish figure... like a proper American gal.

From Mr.Spluffypants: I tried these on a whim, and I have to say I wasn't very impressed. The applicator mechanism is far too fiddly, and the plastic tampon inside far too thin (not to mention uncomfortable and non-absorbant) - I'm sure there must be a knack to using them, but I couldn't find it. They also stained my knickers blue for some reason. I really wanted to like these, but it's back to pads for me.

why dont they have blue ink?

Why the hell? Just fcking WHY?

Willona Woods said:
Why the hell? Just fcking WHY?

And black ink sucks. Only accountants and people in real estate write with antique farm equipment pens!
Click to expand...

Apparently legal documents are supposed to be signed in blue ink now?
S

Even better, if there's two people signing to use a different colour for each.
C

Syrup Beaver said:
Now? That's been a 'thing' for a while.

Even better, if there's two people signing to use a different colour for each.
Click to expand...

I remember when I did the partial transfer of ownership form thing, the bank was adamant that I use blue because it's harder to forge?
T

with blue ink, you can tell it hasn't been copied.

i know RED ink is a no-no

Thorn Bird said:
with blue ink, you can tell it hasn't been copied.
Click to expand...

Unless you used a color copier.
T

APRIL said:
Unless you used a color copier.
Click to expand...

that's just why i was taught to use blue ink on legal documents rather than black.

hell, writing is obsolete. my signature these days looks like it was written by a lady bic stuck in a dog's asshole.

shamwow said:
hell, writing is obsolete. my signature these days looks like it was written by a lady bic stuck in a dog's asshole.
Click to expand...